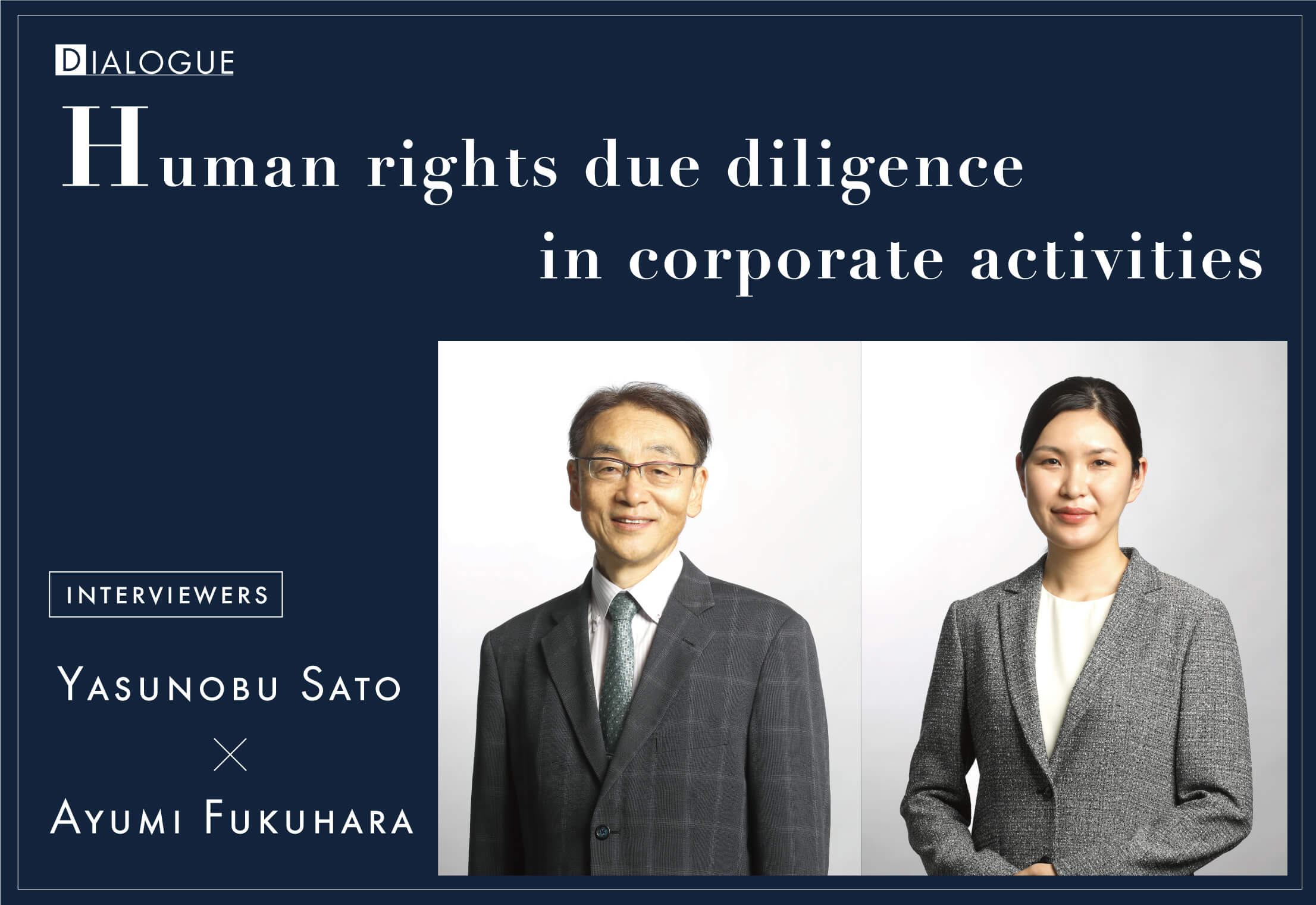 In recent years, there has been heightened international awareness of corporate responsibility to respect human rights. With the announced plan of the EU Mandatory Human Rights Due Diligence Directive and the proactive imposition of sanctions against human rights violations, particularly in Europe and the U.S., Japanese companies are now facing mounting pressure to address human rights due diligence issues. Many human rights issues have also emerged in Asia, such as the Uighur issue, the Hong Kong issue, and the Myanmar issue. In this discussion, two lawyers with expertise in the field of “Business and Human Rights” will share their insights on corporate initiatives that should be considered in light of current global developments.

The Changing Landscape of “Business and Human Rights”

Ms. Fukuhara：
Recently, many issues related to “Business and Human Rights” have been emerging, such as EU regulations and sanctions concerning human rights violations in China’s Xinjiang Uyghur Autonomous Region, and companies have been more frequently inquiring about human rights compliance. Dr.Sato has been dealing with human rights issues for many years, including serving as a legal officer with the United Nations High Commissioner for Refugees (UNHCR). What are your views about the recent developments on “Business and Human Rights”?

Dr. Sato：
The UN Guiding Principles on Business and Human Rights (“Guiding Principles”), adopted by the United Nations in 2011, are a non-legally binding “soft law” that calls for corporate responsibility to respect human rights. Ten years have elapsed since then, and we have reached an inflection point in that countries are rushing to enact relevant legislation, such as the UK’s Modern Slavery Act and the Germany’s Supply Chain Act, which was introduced in June of this year, leading to rapid progress in turning the Guiding Principles into hard law. The United Nations has also established Sustainable Development Goals (SDGs), adopted under the principle of “leaving no one behind.” Japanese companies have finally started to focus on business opportunities to reach them by 2030. I believe that this is one of the reasons that the “Business and Human Rights” debate has quickly gained momentum as the vulnerable are becoming more affected by the COVID-19 pandemic.

Ms. Fukuhara：
My impression is that class action and other lawsuits for corporate human rights violations are on the rise in Europe and the U.S. due to heightened awareness of human rights. Meanwhile, Japan launched its National Action Plan (NAP) on Business and Human Rights in October 2020, but has been criticized for lagging behind global developments in introducing hard law on the issue.

Dr. Sato：
This point is indisputable. Given that sanctions against human rights violations reflect political maneuvering between the U.S. and China, I believe that careful discussions are needed on how to introduce such laws in Japan. In particular, the Uighur issue, the Hong Kong issue, and the Myanmar issue have led to the imposition of economic sanctions and export controls by the U.S., Europe, and other countries based on unprecedented violations of civil liberties and civil rights. Japan also has a bipartisan group of lawmakers working on legislation on these issues. The risk is that these sanctions and controls could be linked and overlap, directly affecting Japanese companies operating in global supply chains and legally excluding them from the market. On the other hand, I believe that companies may have the advantage of “flexibility” in the sense that it would be easy for them to design flexible systems in the soft law stage

Ms. Fukuhara：
Some laws and regulations, such as the EU Mandatory Human Rights Due Diligence Directive currently under legislative debate (as of July 2021), may apply to Japanese companies operating in the EU market as hard law, and companies will need to structure their human rights compliance systems with both perspectives in mind.

“Human Rights Due Diligence” and Beyond

Ms. Fukuhara：
The term “human rights due diligence” is being used more and more in Japan as a framework for identifying, assessing, and addressing human rights risks. What should companies be particularly mindful of?

Dr. Sato：
I believe that it is imperative that we ensure that human rights due diligence does not become a superficial initiative. For example, there is a case in which an NGO accused Australia’s ANZ Bank of lending to a local company in Cambodia that was engaged in child labor and other activities after expropriating farmland. In this case, ANZ Bank withdrew its loans following criticism. However, the bank was condemned internationally for failing to provide relief to the victims of the farmland expropriation, and it eventually decided to pay limited compensation to the victims. It is, of course, important to conduct human rights due diligence, but we should bear in mind that if this identifies human rights risks such as forced labor in the supply chain, terminating the business relationship with the supplier does not necessarily mean that the human rights risk itself is eliminated.

Ms. Fukuhara：
In cases such as the ANZ Bank case that you mentioned, a company that decides to continue lending while engaging in dialogue and providing relief will be faced with a difficult decision as it will continue to face human rights risks. However, it is conceivable that by actively disclosing the details of its initiatives, it will be lauded by its stakeholders.

Dr. Sato：
I believe that relief is an extremely important pillar of the “Guiding Principles.” Horizontal dialogue involving stakeholders such as NGOs and NPOs will also become progressively necessary in the future. In addition, depending on companies’ initiatives, there may be cases where human rights risks can be used as tools to raise “awareness.”

Ms. Fukuhara：
The revised version of the Corporate Governance Code, which was published in June 2021, includes a reference to respect for human rights. In response, investors are likely to increasingly require disclosure of human rights and other sustainability initiatives.

Dr. Sato：
The Singapore Stock Exchange and other exchanges have also begun to require the disclosure of non-financial information in the form of ESG-related initiatives via sustainability reports. In a recent report, a major U.S. oil company appointed a director recommended by institutional investors seeking to enhance environmental initiatives, and I believe that the trend toward ESG investing by institutional investors will continue. There are many areas where human rights risks overlap with environmental risks, such as cases of violations of indigenous peoples’ rights related to land expropriation. Therefore, we need to address these risks within an integrated framework. Conversely, these are the criteria for evaluating companies under ESG. Accordingly, risks can be changed into opportunities if they are approached as an offensive strategy.

Ms. Fukuhara：
In addition, human rights alone cover a wide range of issues, from forced labor and child labor to LGBTQ and hate speech. As a result, companies sometimes express that it is difficult for them to determine where they should focus their efforts.

Dr. Sato：
If we look at human rights from a different perspective, it means “differences should not be alienated.” This is also connected to the SDG principle of “leaving no one behind,” which I mentioned earlier. We should keep this in mind when dealing with multi-stakeholders. It would be a very difficult to strike a balance of the conflicting interests. I believe that lawyers will be able to be of greater assistance in the future, both under normal conditions, such as assessing and prioritizing each risk, and in crises when human rights risks emerge. Amid the rivalry between Europe, the U.S. and China, I hope that Japanese lawyers will play a more active role in enabling Japanese companies, whose main market is Asia, to achieve global market leadership.

Ms. Fukuhara：
We would like to provide support to companies in their “Business and Human Rights” initiatives in a sustainable manner. Thank you for your time today.

This article is given as general information for reference purposes only and therefore does not constitute our firm’s legal advice. Any opinion stated in this article is a personal view of the authors and not our firm’s official view. For any specific matter or legal issue, please do not rely on this article but make sure to consult a legal adviser. We would be delighted to answer your questions, if any.

Back to Featured Topics